Evernote 5 for Windows is ready for download, looks very good!

Even though I mostly use OneNote, I keep Evernote around for snapped business cards. The Windows version of the desktop client just had a major update to version 5, which looks very nice and handles very fast.

Have a look at the official blog post about the release for a lot of details.

Now I am only hoping for an updated Windows 8 store app version to make the Windows Evernote clients just perfect.

The Windows 8.1 availability date has been announced publicly on http://blogs.windows.com/windows/b/bloggingwindows/archive/2013/08/14/mark-your-calendars-for-windows-8-1.aspx

I just stumbled upon this great project by David Newman. The system integrates Kinect facetracking and a custom-built wireless EEG headset for hands-free computer control.

It’s only been a few weeks since Microsoft has released an update for the free OneNote app for Windows 8. Today, the company released yet another update that adds a feature that will please many users who access OneNote on touchscreen devices like the Surface.

As described on the official Office blog, the new version now allows anyone to draw on the app just with their finger on a touchscreen, instead of using a pen or stylus. To access the feature, users simply tap on the app’s radial menu and select the Draw option.

This little helper adds a “Send at 9:00” (or any predefined time) button to your mail that allows you to schedule your mail to be sent at the specified time the next day.

There is also an undo-feature that pops up for 10 secs when you send any message, allowing you to abort sending of the message or reschedule it to be sent “mañana”. How ofthen have I pressed “send” only to freak out about what I just did… Wrong To:, missing attachment or premature sending.

Just as with VS2012.1 (which is installed as part of VS2012.2 for those of you who don’t already have VS2012.1 installed), this release contains important fixes as well as a wealth of new functionality, addressing feedback we’ve received from the community and aligning with key software development trends in the market.  The new functionality primarily spans (though is not limited to) five areas of investment: agile planning, quality enablement, Windows Store development, line-of-business development, and the general developer experience.

Agile planning. Visual Studio 2012 introduced a wide range of capabilities focused on enabling agile teams, not only for development but also for planning.  With VS2012.2, Team Foundation Server (TFS) has been augmented with an additional variety of features to help make it even easier for agile teams to do their planning, in particular around adapting to a team’s preferences and work styles.

Quality Enablement. This update introduces web-based access to the Test Case Management tools in TFS such that users can now author, edit, and execute test cases through the web portal.  It also includes the ability to profile unit tests (with results across both the unit tests and the code under test surfaced through a single report), improved unit testing support for both asynchronous code and for interactions with the UI, unit testing support for Windows Phone 8 apps, unit test playlists that enable a subset of tests to be managed together, significant improvements around testing for SharePoint 2013 (web and load testing, unit testing with emulators, coded UI support, and IntelliTrace support), and more.

Windows Store development. VS2012.2 includes additional new features for Windows Store development, beyond the quality enablement capabilities already mentioned.  For example, VS2012.1 included a new memory profiling tool for apps implemented with JavaScript, enabling developers to better understand the memory usage of their apps, to find and fix leaks, and so forth; for VS2012.2, we continued to invest in improved diagnostics for JavaScript apps with a new profiling tool that helps diagnose UI responsiveness issues and latency in visual updates.  This release also incorporates the latest version of the Windows App Certification Kit.

Line-of-business development. Beyond improved support for building Windows Store apps, VS2012.2 also brings with it a wealth of new and improved capabilities for developing and modernizing line-of-business (LOB) apps.  This includes the ability to use LightSwitch to easily build cross-browser and mobile web clients with HTML and JavaScript, with support to target SharePoint 2013 and Office 365.  It includes support in Blend for SketchFlow, WPF 4.5, and Silverlight 5.  And more.

Development experience. As developers spend so much of their time using the IDE, it’s important that Visual Studio provide as streamlined an experience as possible.  Towards that end, we continually invest in new features and productivity enhancements to make the IDE the best and most productive environment possible, a trend we continue with VS2012.2.  Code map has been updated with improved responsiveness as well as with debugger integration, providing a visual perspective on the relationships and dependencies in code being debugged.  Symbol loading has been improved across both the profiling and IntelliTrace experiences.  The Workflow designer now has an improved debugging experience.  The XAML design surface in both Blend and the Visual Studio editor includes multiple performance and reliability improvements, in particular when loading large projects and when using third-party controls.  The IDE’s light and dark themes are now joined by a third, blue theme.  And more, such as including all of the improvements made available through ASP.NET and Web Tools 2012.2.

A more expansive list of what’s new in VS2012.2, including new features and bug fixes, is also available.

Zombies!!! Or my journey into the next generation of the social board game.

I have been a long time fan of the board game Zombies!!! where players have to escape a Zombie infested town. it’s an interesting mix of competing to reach a heli-pad first and co-operating to handle the crazy amounts of Zombies. 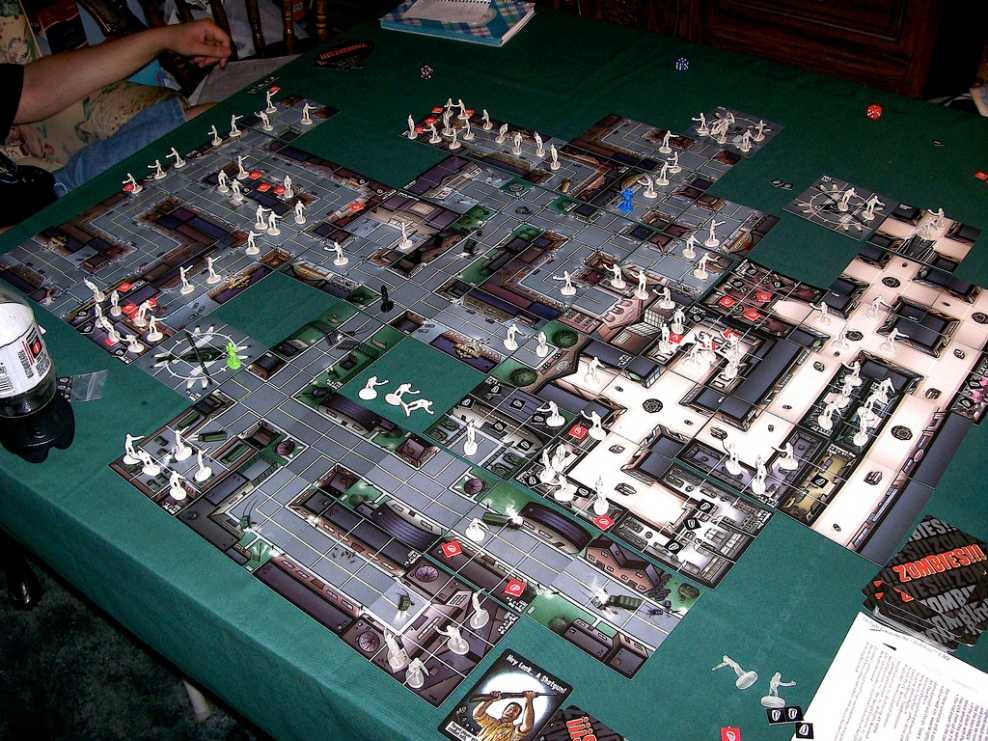 The downside of this game is the huge amount of material you need to play it and the time it takes to set up / tear down.

Now this game has been ported to a Windows 8 Store App that has all the aspects of the full board game and adds very atmospheric sound and graphics of the town, that can be viewed and zoomed in real time. It also adds very cool animations to the Zombie fight sequences which adds a lot to the overall atmosphere.

It still doesn’t alter the gameplay experience of the board game and we recently played it with 5 people on one tablet and had a great time in a epic battle that lasted for over three hours.

Computer opponents can of course take the place of missing players.

The downside is that the game is meant to be passed from player to player as the current player’s card hand is shown over the entire screen when activated, so it has to be concealed from the other players.

Also, this would play real nice on a large tablet, seeing the action was sometimes a bit hard for all five of us as my 11-inch tablet was a bit small in the center of the table.

Adding new parts to the ever growing town.

A fully laid out town, Helicopter waiting on the far left in this case

A player plotting his move.

Fighting a Zombie with the fire axe from the fire station. Our winner was using this tool for this victory…. 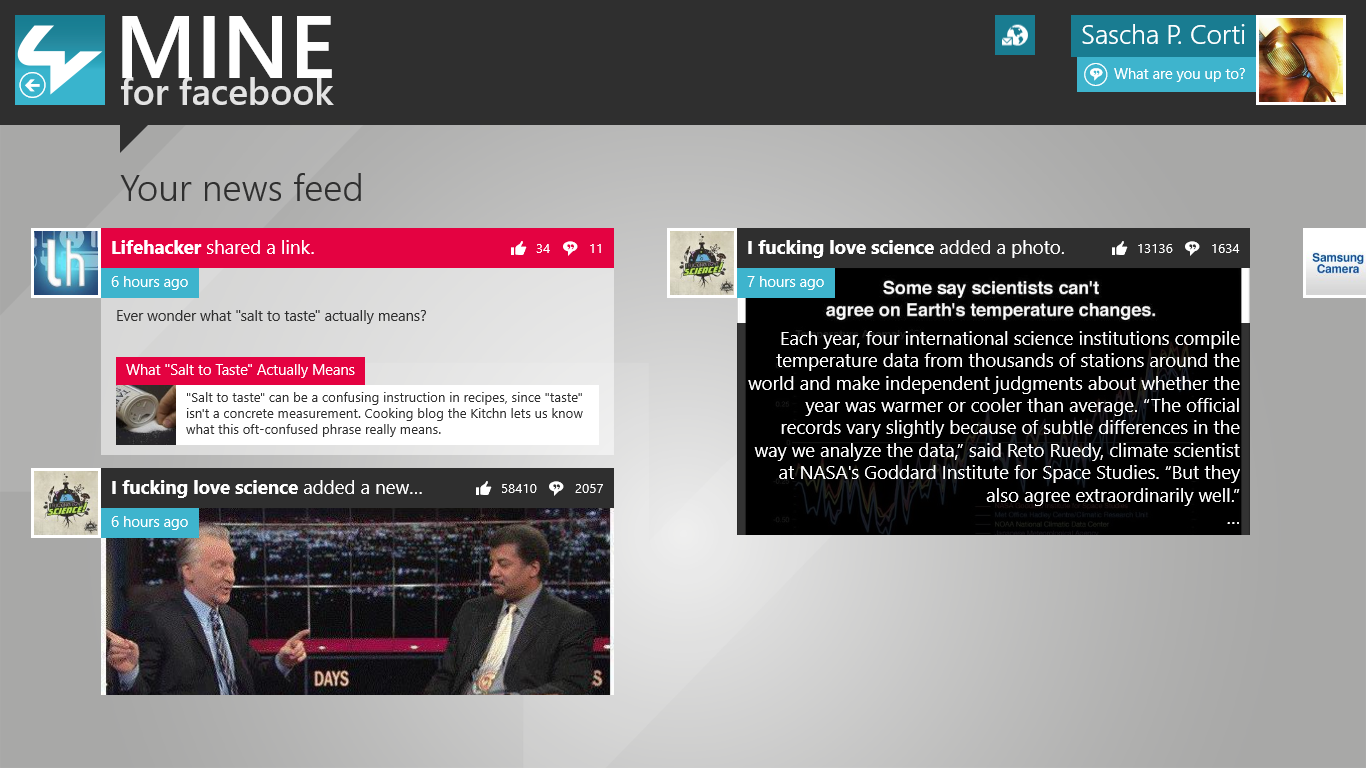 “MINE for facebook” is a new Facebook client that can be found in the Windows 8 store. It seems to do everything right at first sight and above all, it has really great looks.

At first glance, I noticed it can run as a background app with notifications to the lock screen, it can show the full news feed as well as customizable feeds, the personal profile, notifications, friend lists, groups and events. It registers itself as a sharing target, so text or pictures can easily be uploaded to Facebook without ever leaving the new Windows UI. The search charm works as well, implementing the regular Facebook search page.

This app looks VERY promising and certainly gets a top position on my Windows tablet. Thanks, Marvin Apps!

My favorite productivity tool “PureText” is back with a version 3 that now runs perfectly under Windows 8.

PureText is a small tool that adds the shortcut key Win+V to paste any text in the clipboard without ANY formatting. I have used it for years but it stopped working in Windows 8.

The just released version 3 fixes that and even adds a 64bit version.

Head over to http://www.stevemiller.net/puretext/ to download the newest release.

Thanks a ton, Steven!

After using it for some time, I have finally registered Sublime Text 2.

I finally got around to register my copy of Subilme Text 2 today, my favorite Notepad replacement / plain text editor for all kind of code and markup.

Also worth a look: the Sublime Text Unofficial Documentation

I really love this handy editor.