Yesterday I stumbled upon a blog talking about the installation of Windows 7 RC on a Samsung Q1 UMPC.

I decided to give it a try with Windows 7 RTM and must say I do not regret the choice.
The first thing to do is to get the latest BIOS from Samsung, Version 20MA from here. While on the site, also download the Audio drivers and Video drivers (same page) for Windows Vista, the only drivers I updated after installing Windows 7 as well as the “Easy Button Manager“, again for Windows Vista. The Easy Button Manager will allow you to use the four programmable keys in the dial on the right side of the device. The other application that I tested, the “Menu UI” loaded but didn’t work properly as it seems to be unable to talk to Windows 7. So don’t bother installing that one. I wasn’t interested in any of the other apps, so I left them out to begin with.
Setting up Windows 7 via an external USB DVD drive worked perfectly. 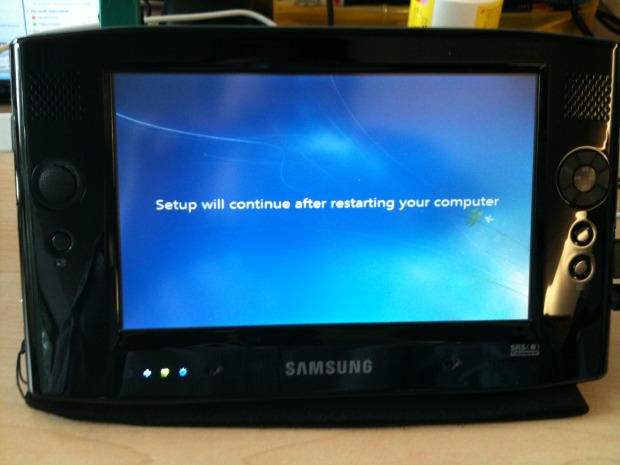 After starting Windows 7 I noted that all hardware was detected properly, including the touch-screen which is recognized as a simple input device. This means that not all pen-/tablet-features of Windows 7 are enabled, but basic pointing and clicking works. The guide on replacing the digitizer driver on Windows 7 found here only works for pre-release versions of Windows 7, RTM will not allow the installation of this particular driver.
Audio was not working, so I replaced the audio- and video-drivers with the downloaded ones and installed “Easy Button Manager”. You may want to test the video drivers supplied with Windows 7 as the downloaded ones do not enable Aero Glass either, due to the lacking speed of the graphics chip.
Next I downloaded and installed the “Microsoft Origami Experience 2.0” and all my apps. 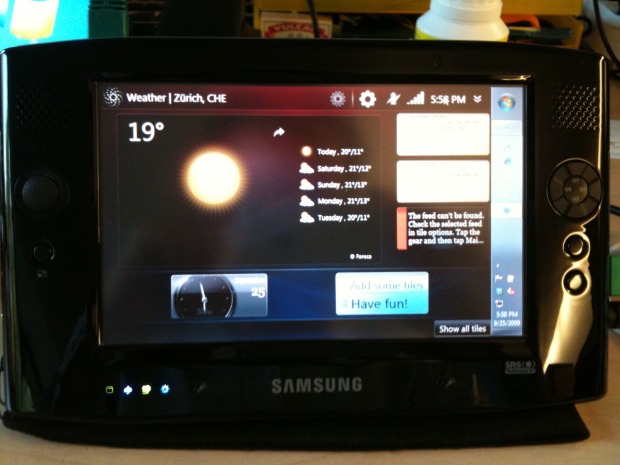 That was all, now the aged UMPC has a new life!